What is an airfoil, and how does it work:
An airfoil is a body (such as an airplane wing or helicopter blade) designed to provide a desired reaction force when in motion relative to the surrounding air.

There has been much discussion with regards to how and why airfoils really work. The popularly-known explanation (as seen in K-6 textbooks) involves mis-applying Bernoulli’s principle by stating that high-pressure, low-velocity air on the bottom-side of the airfoil and low-pressure, high-velocity air on the top-side, which recombines at the trailing edge of the airfoil at the same time, regardless of angle-of-attack, is the sole mechanism by which lift is generated.

Well, if this is the case, then we would have a really, really tough time trying to explain how airplanes fly upside down:

The truth is, the top-side air travels significantly faster than the bottom-side air. They never recombine (the image below illustrates this fact).

(Velocity field around a wing, image from http://www.av8n.com)

Additionally, the image below illustrates, using pressure patterns, that the angle-of-attack indeed has profound effects on the lift that's generated.

A good article that provides a good, brief introduction to these principles is available on NASA’s website here:
http://www.grc.nasa.gov/WWW/K-12/airplane/bernnew.html

Why put airfoils on cars:
Airfoils, when properly mounted at the rear-end of a race car, can generate large amounts of downforce. This downforce offsets the aerodynamic lift inherent to the car, and in turn increases the amount of tire grip available. This increased tire grip allows the car to carry higher speeds through the corners and out of corner exits. Being able to carry the greatest corner exit speeds is critical to producing the lowest lap times, especially when there are many corners that lead to long straightaways.

What to consider when putting airfoils on cars:
In application (airfoil on a race car), the key point to understand is to know that the amount of lift an airfoil generates is dependent on many things, including (but not limited to):
1. Angle-of-Attack (AOA).
2. Shape.
3. Size.
4. Position in the air stream.

Considerations must be made for all of the above items when designing, installing, and using an airfoil on a race car.

A 3D airfoil is an airfoil that has variable airfoil cross section across its span. Most modern aircraft airfoils are 3D airfoils. When a 3D airfoil is designed for use on a production-based race car, the outer sections will typically have much more AOA built-in than the center section. For example, if the center section is set to zero degrees (relative to the ground), then the outer sections may end up at 15 degrees angle (relative to the ground).

Why and when to use a 3D airfoil (rather than a 2D airfoil):

There is a popular notion that, in order for an airfoil to function on a race car, the airfoil needs to be in clean, free-air at or above the rear roofline of the car. This is only a partially-true statement. On cars with solid roofs and sloping rear windows, the air that flows from the rear center edge of the roof will travel downward at an angle toward the airfoil. The problem here is that only the center section of the 2D airfoil will see this downward "push" of air, while the outer section of the 2D airfoil will see much less of this (it will see straighter, freer air).

Which type of airfoil is better?

In order to find the answer, we must know our intended use and we must consider the following:
1. Type of car (sedan, coupe, hatchback, open-wheel, etc.).
2. Approval of the specific airfoil (type, size, supplier, etc.) for the race series.
3. Mounting-height rules for the race series. 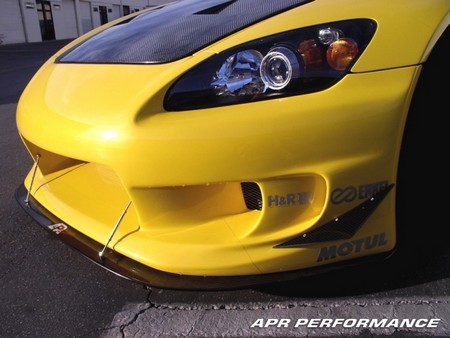 What is a splitter:
A splitter (a.k.a. "front splitter") is typically found on the front-end of a race car, appearing as a flat extension to the very bottom of the front bumper. This splitter extends straight out, parallel to the ground, and can be made of carbon fiber or other stiff material. It is attached to the bottom of the front bumper, and may also be supported by two or more support rods at some distance forward of the bumper mounting points. These support rods ensure that the splitter stays parallel to the ground, even when there are outside forces around the splitter.

What is an air dam: 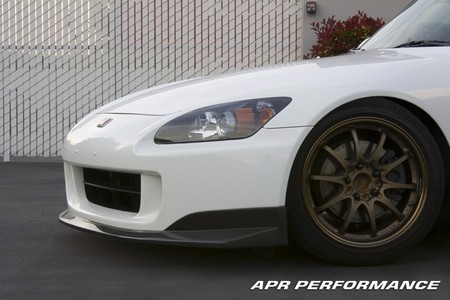 Besides looking cool, the splitter and air dam serve the following functions:
1. To reduce lift.
2. To help guide air to a useful location (i.e. radiator).

What goes on at the front-end of a car:

When a car travels at high speeds, the air pressure in front of the car can become very high. All this air ends up going both above the car (over the hood), and below the car (under the front bumper). When too much of this air gets under the front bumper, the under-car air pressure builds up. This increased air pressure contributes to lift, which causes the front-end of the car to lighten up, thereby reducing the amount of traction at the front of the car. This high pressure (and lower speed) air, when compared to the air speed above the car, will create situation where there is increased lift over the entire car. Typically, most production street cars, when traveling at higher speeds (60mph+) produce large amounts of positive lift.

How the front splitter and front air dam work:
What we want to have is lower pressure, faster-moving air below the car, and higher pressure, slower moving air above the car. The lower pressure side, when it happends to be under the car, contributes to reduced lift. When the lift is reduced sufficiently to the point where there is negative lift, then there is net positive downforce. 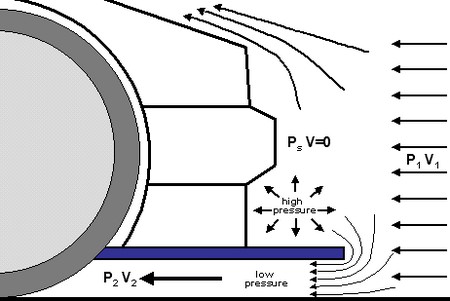 When the splitter is mounted very close to ground level, considerations should be made to ensure that:
1. There is sufficient airflow to the engine bay and driveline components.
2. There is sufficient ground clearance for the available suspension travel.
3. The rear diffuser (if installed), still gets the fast-moving, low pressure air it needs in order to function properly. 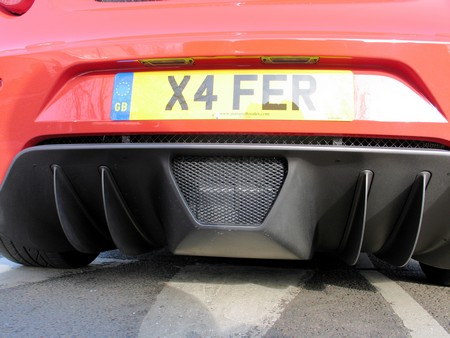 What is a diffuser:
A diffuser is a shaped part of a car's body, usually found in the underside of the car. It can be located at the rear underside, or closer to the front underside near the wheel wells. A rear diffuser is typically sloped upward from front-to-back, and may have vertical fins attached to the bottom of the sloped surface. The rest of this article will apply, for the most part, to the rear diffuser.

What goes on at the rear-end of a car:
The area immediately behind the car tends to have turbulent, slow-moving air. The fast underbody air that exits the car ends up meeting with this slow-moving outside air. The greater the air speed difference is, the more turbulence is created. This turbulence causes unwanted drag and disrupts the airflow that exits from the underbody, which in turn decreases the underbody's ability to reduce lift.

How the diffuser works:
The diffuser itself does not actually create downforce - it works in conjunction with other aerodynamic components to reduce drag and lift. The upward front-to-back angle of the rear diffuser causes the fast-moving underbody air to expand and slow down. This slower air is then better able to meet up with the slow outside air, thus reducing the amount of turbulence behind the car. The vertical fins are there to make sure that the air at the rear left and right sides do not disturb the function of the diffuser. 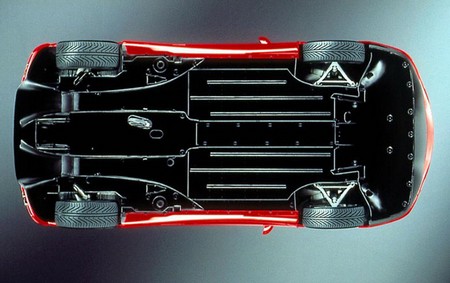 When is a diffuser effective:
As a general guideline, the rear diffuser needs to be angled upward at least 10 degrees. In order for a rear diffuser to be effective, the air that travels under the car from the front needs to be as fast and smooth as possible. Slow-moving, turbulent air is not going to help a diffuser do its job.

In order to create the smooth air that the diffuser needs, it is recommended that the car have a flat undertray (a.k.a. underbody) that covers most of the uneven surfaces and components on the cars bottomside. However, production road cars typically do not have, or only partially have, an area that is covered by a flat undertray. 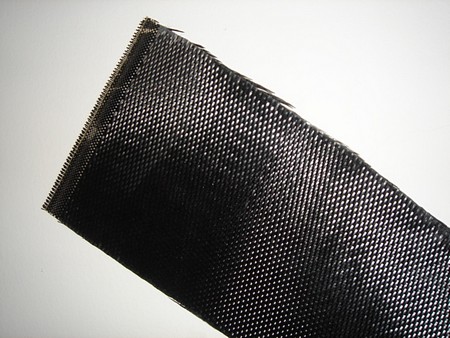 What is carbon fiber:
Originally created in 1958 by Dr. Roger Bacon, carbon fiber is a polymer composed mostly of carbon atoms linked in long chains. It is a lightweight and very strong material that is found in all types of products including airplanes, racecars, and golf clubs. Very long strings of carbon fiber are twisted into yarns, then woven into matrix-patterned weaves. When these weaves of carbon fiber are combined with plastic resins (such as epoxy), a composite material called Carbon Fiber Reinforced Plastic (CFRP) is created. CFRP is lighter than aluminum and stronger than steel, and makes for the perfect composite for use in race cars when minimizing weight and maximizing strength are of utmost importance. 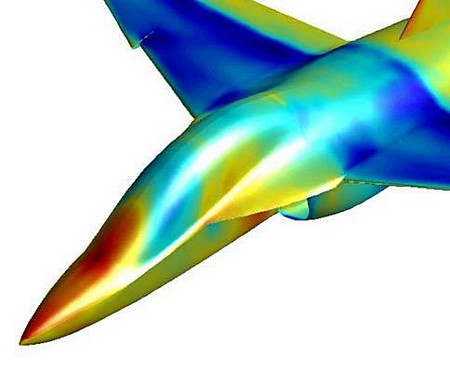 What is Computational Fluid Dynamics (CFD):
Computational fluid dynamics is a specialized sub-discipline of fluid mechanics (the study of fluid physics) that involves using algebraic equations to solve fluid flow problems. CFD has origins in the aerospace industry dating back to the 1960s, where companies such as NASA, Boeing, Lockheed, and others developed their own CFD programs to perform the analysis needed for their aircraft designs. 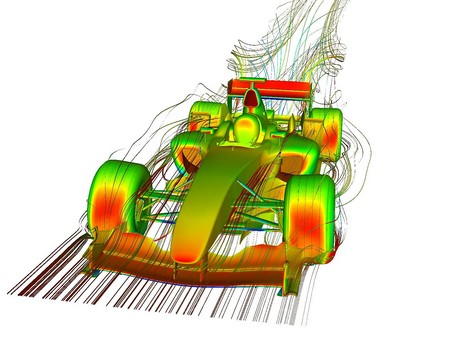 CFD is used successfully in all the top levels of motorsports, including Formula One, IndyCar, and even NASCAR. CFD is even used by car manufacturers in the development of many of today's road cars. Companies have invested tens of millions of dollars, if not more, to implement CFD design in their product. As a disclaimer, CFD is not 100% accurate. Many factors can affect the accuracy of CFD simulations, including accuracy of mathematical models, limits in computing power, and the scientist's ability to interpret the data that that comes out of the computer. 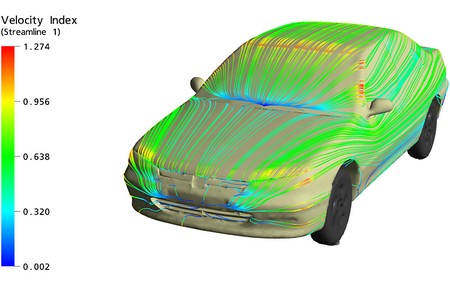 Despite its lack of total accuracy, modern-day aerodynamic design could not have progressed to its current state without the help of CFD. The results of CFD-developed automotive products are real, and can easily be seen in both race cars and road cars.